This one is actually kind of a re-upload to this blog.

I uploaded this one several years ago, but the scuba cut I made was always blocked on Youtube, so decided to solve that problem by making two videos!

One short video in which you can see the sexy frogwoman on the surface gearing up and underwater.

In this version, the scene with her on the boat is shorter, and the fight between the frogmen is completely out.

The long version with around 8 minutes will be on google drive.

And here is the short video:

And here is the XXL version, with more footage of her on the boat and with the frogmen fight:

If you have visited this site from time to time you may know my first complaint:

The missing color! Wetsuits and underwater scenes look so much better in color!

And in my version that sneaky frogwoman wouldn’t escape the scuba fight.

In my version, she would fight alongside him, battling the 2 evil frogmen. One would rip the scuba mask of the good guy off. While he is searching after it they would attack her. She would finish one off but the second would cut her air hose. She would try hard to get his regulator. In the end, she would survive together with the hero.

But on the good side, she looks great in that rubber wetsuit with the double hose regulator. A great example of sexy vintage scuba gear!

This is the movie in which you can find these scenes:

How would you have changed the story to show more of her underwater?

In this one, we have a couple diving to find a certain box. In this box, there are some really nice “stones”.

I had to shorten the video a bit to make it not too long for YouTube (Baywatch videos over 5 minutes got blocked in the past).

And if you wanna see what happens to him….and wanna watch a short, but sexy Bonus scene with Carmen Electra in stunning boots:

A good dive scene, she looks good in scuba gear!

Have you noticed that her regulator changes between the beginning and the end (colors)?

Also, her blonde hair clearly looks like a wig.

However, I like her evil spirit…a shame she didn’t get into a scuba fight with some Baywatch folks.

This is the episode:

It is time for another(self-written) scuba fetish story!

This time I wrote a rather short story (6 pages – 1 introduction page).

Perhaps it will become a series if it is well received.

James is a photographer for marine life and is on a dive to take some pictures of sharks until a mysterious frogwoman appears.

He is intrigued by her sexy body which is encased in a stunning rubber wetsuit.

What is she up to? James will discover her plans sooner or later.

A picture of her before the dive (without her hood): 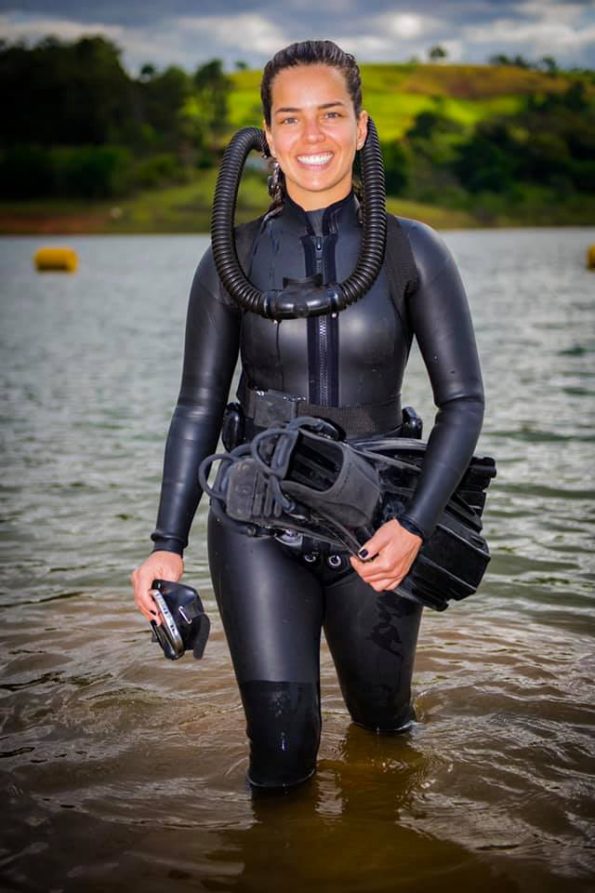 Wanna find out what will happen to James and that mysterious frogwoman?

Check out the VIP club, the story will be waiting there for you!

(among my other scuba fetish stories and the monthly videos)

Contains a lot of fetish elements:

I got a mail from a guy who already recommended me some videos/movies. Thanks to him you got the chance to watch them later on this blog.

He asked if I would know the movies/TV shows to his descriptions and the linked video.

Well, I don’t know them….but maybe YOU do!

Here are extracts from his mail:

…..
1) its basically two women scuba diving, but they find a dead body of another scuba woman (there was a drowning scene of her btw)

anyway i thought i share that with you, don’t know much of the plot cause i was only interesting in the scuba scene.

2) which reminds me, I remember another scuba scene from a japanese drama this time involving three women learning the scuba dive then later while diving their instructor (a guy) suddenly drowns and they investigate. (sorry for the bleak info thats all i could remember)

So….if you know the title to one or both of these two…

Another classic scene that is missing here…until today!

A naughty couple takes a scuba dive at night, exploring a wreck.

She has special plans for this dive…but some …not so… friendly fish are ….hungry.

Here is the video (for obvious reasons not on YouTube):

Well, that’s a “coitus interruptus”! I like how she is the active one, surprising him inside the wreck.

And how she grabs his knife to cut off his bathing trunks…verrry nice!

But the damn fish have really bad timing, could they had come some minutes later? 😉

This is the movie:

The VIP-Club 2.0 has been updated with new material, enjoy! 5 new scubalicious videos!