The second video is already on this blog, but not in HD. And it surely deserves the HD quality!

These scenes are from a two-part episode, so I put them into one post.

We have a female diver who explores a cave together with the Hoff…..to find something unexpected!

In the second scene, the same diver gets attacked by an evil villain and his submarine!

And here are the videos:

Scenes like that contributed quite a lot to starting my scuba fetish back in the 90s. And Baywatch offered not only smoking hot chicks on the beach….but also quite a lot of scuba scenes 🙂

And this villain and his submarine….a pretty great idea! And a great peril scene for sure. The way she is trapped in that gripper arm…. trying to get out of it…. a really good scene.

These scenes are from episodes 1 and 2 from season 2.

And that’s not all for this week!

Check out a post on my other blog from today:

A masked female thief, her colleagues, and the big theft on the high sea 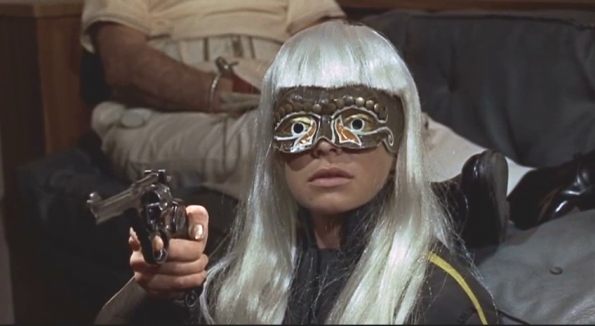 A long scene with a masked woman…wearing a vintage wetsuit!

Well, these scenes aren’t interesting because of the actual “diving” but for the fantastic vintage scuba gear that is shown!

Story: A first underwater city was built on the bottom of the ocean. Soon disaster strikes and the frogwomen and frogmen have to escape…

Well, ok, the movie is from the early ’60s, but nonetheless….the fake underwater scenes were the pretend to “dive” by walking around on the ocean floor…with soap bubbles emerging from their regulators…it’s pretty hilarious. And I don’t like the fact that they aren’t underwater at all.

BUT, these suits are looking fantastic! Sexy vintage rubber wetsuits…. 🙂

And really funny, how the first woman to appear in dive gear in this movie of course runs into trouble in a matter of seconds and needs to be rescued (classic 50’s/60’s).

Damn, how great would it be if these frogwomen would have been actually underwater…and encountered some perilous situation in this gear?

If you wanna know the title of the movie (although it was kind of mentioned earlier):

What do you think of these scenes and that gear?

Time for more Baywatch in HD!

In this scene, a hard hat diver is stuck underwater and needs to be rescued! A case for the Baywatch lifeguards 😉

And I included the “above the surface shots” of our wetsuited female diver.

Well, first he gets trapped underwater and then he rips open his suit thereby flooding his helmet….. he is either a VERY unlucky guy, or just plain incompetent 😉

But ok, in that way we have a reason to get saved by the Baywatch divers. And even it is not a rubber wetsuit…I especially love women in black wetsuits.

In my version, he would only pretend to be trapped underwater and only she would come to his “rescue”.

Then we would have a nice scuba fight for life and death. And after a long struggle, she barely survives his evil attack.

Wanna know from which episode this scene is?

Another great scuba fight scene with a woman in a comic! Thanks for recommending me this one 🙂

Now all you folks may enjoy it too!

(Click on the image and browse through all 7 images to see the whole action!)

I really love how they struggle and that he goes for her air hose immediately and cuts it.

What I really don’t get… on the cover and later you can see that she actually has a 2nd regulator (in gold/yellow)…..WHY doesn’t she use it as soon her primary/regular air hose is cut?

Perhaps she is in panic or shock….but well, if you can’t get air from your normal regulator…you should try the other one 😉

Ok, she loses a lot of air through the cut hose but until the tank is empty….she can use the 2nd regulator.

Or perhaps she just wanted to be saved by the guy 😉

What do you think of this scene?