On my other blog you can find a villainess in an unusual gas mask: 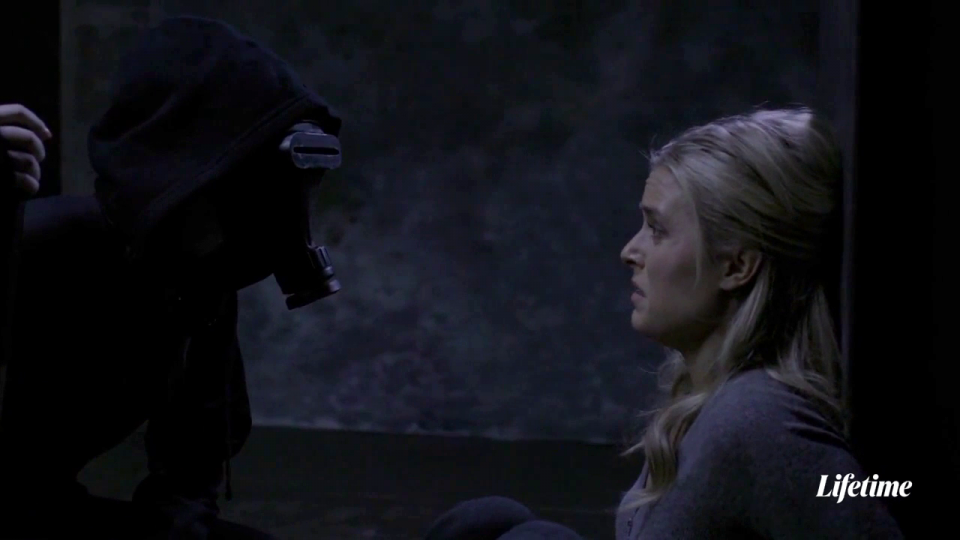 Yeah, a gas mask would fit here too, but this time I decided it would fit better to the other blog since the villainess has a secret identity she wants to disguise.

Today I wanna present a short trailer with scenes from the first 5 videos of “Project F”.

So, you can actually see some moving images and sound from these videos, instead of just some screenshots.

The page with all the videos of “Project F” can be found in the menu above or here:

At first, I thought about including some music in the trailer but then you couldn’t hear the actual underwater sound not as good.

My next idea was to make an alternative trailer version with some music from Thunderball, but I wasn’t satisfied with how the music would fit the scenes, so I discarded that idea…..at least for now. Perhaps I will make an alternative version of the trailer in the future.

And in case you haven’t read my post about how that shooting went:

As some of you may have seen already, I have re-uploaded the videos to the newest posts here to my new Youtube channel over the last days:

So, the new channel has 162 subscribers right now, so that is a start to get back to where the old channel was (6000).

So, please, if you haven’t already….SUBSCRIBE to my new channel!-

Today I re-uploaded 15 (unlisted) videos from “My Thunderball project”.

So, most of these videos are back up now. I would have uploaded the rest of the videos as well, but as it seems “new” Youtube channels can’t upload more than that per day.

Not many posts for now, but it too will grow over the next weeks.

Feel welcome to check it out and subscribe to it!

Next week there will be a lot more activity here:

The trailer for the first 5 videos of Project F will finally be uploaded in the next few days.

Also, the 7th video will be available for the VIP club next Sunday.

And I wanna squeeze in a new post with a new video as well.

It will take some months to re-upload all videos with all the settings, but sooner or later all the videos from the old one will be on this new channel.

So, check it out, and please SUBSCRIBE to it!

It took me 4 years to get to 6000 subscribers with the old one…I hope that number can be reached (much) sooner.

I’m counting on you guys!

Today I wanna present another video of Project F!

In this one, Frogwoman Uma is diving with an Avon S10 gas mask!

The nice divemaster who can be seen in video 3 is the one who is filming her, I wasn’t even in the pool room at that time as it was very late and I was pretty exhausted from the day and all the preparation beforehand.

As you can see it’s the first time in a Project F video that the camera is above the water, even it was only for a brief scene, but you can hear Frogwoman Uma hear breathing above the surface.

This gas mask was provided by the divemaster who is also a friend of hers, he also did the filming here.

The Viking drysuit should be really great for fans of heavy gear. The suit here was also provided by the divemaster. It’s pretty wide for her, even Frogwoman Uma is very tall.

But I think she looks really good in it!

At the very end, there is also an unintended “action” scene as the attached regulator wasn’t working at the end as it should have 😉

The first minute of the video is pretty dark, but don’t worry, the rest is better like in the screenshots above.

I used the same filters as before (white balance, 10% more brightness in the shadows, text).

The original/raw footage was longer than this cut, I left out one dark video scene.

Just enough so the video would be under 4 minutes, so you guys in the VIP club could have another video included.

The video is available in the VIP club in January alongside other content….as it is under 4 minutes of running time!

Here is a quick overview of the content of January:

You can download these videos in the VIP club, but only for your personal use.

It’s pretty simple, I had to spend a lot of money, especially on scuba gear and location rent.

A lot of my …limited… savings were used up for that.

If I don’t make enough money with these videos…..I won’t be able to make new videos.

So…. I hope you appreciate these videos and want to see more in the future.

Check out her Facebook page where you can see much more of her:

I planned to upload a short trailer with scenes from the first 5 videos today.

But as my Youtube channel got nuked yesterday…. it won’t happen today.

Instead, I will upload it sometime next week on my new Youtube channel.

The 2nd post for today (+update from January 2 below)

A very sad one.

Perhaps you already wondered why the Frogwoman Youtube channel is down.

I am …….devasted²…….. as all those videos I uploaded for years are now just gone from the internet and my blog.

So what has happened?

I uploaded an unlisted video for the VIP club today that contained some sexual content (edit: means some partial nudity, no actual sex).

I was aware of that and activated the 18+ age restriction.

That wasn’t enough for Youtube. So what did they do?

Did they delete the video? No.

Did they delete the video and give me a strike (3 strikes and you are out)? No.

They just killed the whole channel!!!

I filled out an appeal to save the channel as one final measure I could take.

Perhaps there is a tiny chance they will decide in my favor and put it back on….but the chances are rather very slim I fear.

If it is really gone….I don’t know what to do…. yeah I could open a new channel.

But re-uploading all the content and getting all these subscribers back that I worked for to get in all those years….. I don’t know if I can find the energy to do that.

All the content for the VIP club and the “Project F videos” are still there!

So, I tried several appeals to get the Frogwoman Org Youtube channel back online….but to no success.

I got messages they would get back to me within 2 business days but I got replies only half an hour later each time.

I took a great effort to state my opinion but I only got “copy and paste” replies back that didn’t address anything I actually said.

Yeah, I shouldn’t have uploaded that video to Youtube, that was my fault and I am really angry about it!

But I think the consequences out of uploading that one (unlisted) video are WAY too heavy. It feels like if someone unarmed robbed a pack of gum from a store and got 40 years in prison for it.

As I mentioned yesterday: Why didn’t they delete the video and give me a strike for it? That would feel reasonable and ok.

The video contained (partial) nudity but no sex or violence. And that was already enough to completely nuke the channel????

Ok, however unfair it seems to me…it’s done, there is no way back. At least not for my old channel.

But I won’t quit.

I will build a new Youtube channel, even it will take months to re-upload all these videos from all those years.

I will try to re-upload each day the videos of one month (average) starting with the new ones and going back from there.

Also as I go to all that trouble I wanna improve some things. As I am checking all these posts and videos I can make a sort of index list in which you can search for a movie title and find the link to the actual post about it. I guess that would be a great additional feature for the VIP club.

It took me 4 years to get that 6000 subscribers I had on the old channel. I hope that I will reach that number way sooner this time with some adjustments.

Yeah, it wasn’t a big channel as it only covers a small fetish in comparison to other fetishes, but I was somehow proud of it.

So, no matter how many months it will take…all these videos will be on Youtube again!

7 scubalicious videos and 31 pictures are waiting for you this month!

+ 2 more new videos of Project F will be uploaded this month, the first one on January 2

….the prices for the VIP club membership went up as the content in the VIP club is now bigger than in the past.

Actually, this is the first time the price went up since I started the VIP club 5 years ago.

The new prices won’t affect anyone who has donated before 2022 and has an ongoing membership …of course.

The new prices can be found on the VIP club entry page: