Remember this scene I showed you weeks ago? 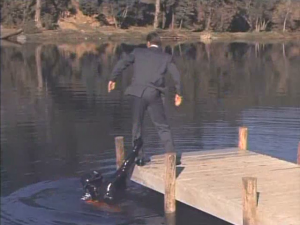 (*EDIT* New link to a newer post with better quality)

Well, I totally forgot that there is another scene with that frogwoman!

A woman arrives at a lake and she enters the water for a nice swim, but below her, someone is already waiting for her…. our mysterious female diver (that one who attacked the man in the picture above)!

So, and here is the VIDEO:

That scene happens before the scene with the man…

Your opinion about it?

And in case you wonder about the title of this movie:

Today I wanna share some pictures with you… pictures of a Japanese frogwoman in full (sexy) scuba gear!

Including a great full face mask and a hot rubber suit!

Well, imagine that gear in an underwater fight! That would be something!

So, after some editing, I got two more scenes from “Death is a woman!”.

And of course, in color! Not the old black and white version.

So, the luscious, but deadly female scuba diver is back in action!

And Tricia Noble (aka Patsy Ann Noble) let us see her well-trained body….

And here is the video of the 1st scene:

And here is the video of the 2nd scene:

Today I wanna present a great scuba outfit in a very well-made “art”-picture.

This would my ideal ….mysterious “frogwoman-thief” who steals at night from some yachts…and encounters some police divers who try to stop her…try to cut her air hose(s) to bring her to the surface and unmask her there. But she is a well-trained fighter….

Oh, that would be great stuff for a movie, or? But enough talking, here are the pictures:

So, it’s time for some scenes from the scubalicious movie “Death is a woman”!

And it’s the rare version in color!

A criminal diver couple is diving for some hidden drugs. But one of them doesn’t wanna share anymore….

Guess you may wanna see the video (2 parts)?

Great scenes in my eyes! 🙂

She really looks gorgeous and was certainly in great shape back then!

The way she attacks him from behind is portrayed rather badly, as everyone can see that she isn’t hitting him 😆 and he doesn’t show a real reaction to it.

A knife with a retractable blade and some fake blood would have been great here.

I love that she then slices his air hose, even it seems to be the wrong hose?! Normally with a double hose regulator, the intake hose is the one on the left (watching at the diver).

But here no air escapes the sliced left part. Seems like the intake here is on the right side (watching at the diver).

However, it’s a great and rare scene! You won’t find many videos where a female scuba diver kills another diver! 😉

A mysterious frogwoman emerges from the ocean in a 60’s vintage rubber suit!

Here some pics out of the video below:

And here it is, the video:

Rare stuff (at least in color), so I love it! Too bad we don’t see her underwater with that equipment 🙁

But she looks fantastic in that suit (Thunderball vibes!).

And if you wanna know the title, here is the link:

LiNK: Title of the movie