After a really long time of waiting for this movie, I was finally able to see it last Thursday.

I could have seen it already but I wanted a full HD picture and a language I can actually understand.

The german blu-ray has the original language on it (Swedish) and a german language option of course. You can switch on german subtitles as well.

I watched the movie in german once and watched the underwater scenes again a day later with original Swedish audio and German subtitles.

The movie has a runtime of 82 minutes. At least 40(!) minutes of that is placed underwater! You won’t find many movies that can offer that….especially with female divers.

And it’s pretty unique because there are actually no sharks or other creatures in it like in the horror flicks (examples: “47 meters down” and “47 meters down – Uncaged”).

Also, after 9 minutes in….you won’t find a single man in the whole rest of the movie! As far I can remember that happens only in one other movie I have in my movie collection: “The Descent”, where 6 women explore a cave system and encounter some monsters there. I know quite a lot of movies with no women in them (mostly war movies) but the other way around is a rare thing.

The fact that there are over 40 minutes of underwater scenes in the movie is awesome but turns out to be kind of problematic for this post. I won’t show all of them of course. But which scenes should I present here?

Also I don’t wanna show scenes with major spoilers to the story here.

Today in this post I wanna present two scenes to motivate you to buy and watch this movie. More on that….later.

For now, let’s start with….

A nice peril scene for starters! Even it was pretty predictable….and hard to understand what the idiots on the bridge were doing as it was known that she was working down there.

A good idea of her to get rid of her tank to jam the propeller, as it was pretty much her only option besides waiting for those idiots to turn it off. But then it might have been too late….

Tuva, the younger sister is trapped behind a rock at 32 meters depth! Her oxygen is gone and Ida hastily returns to her with a full tank…

Great scenes! It’s no secret that I really like scuba peril scenes. And seeing both of them here in desperate need of air….is quite …well….sexy 😉

Also, the swapping with their full-face dive masks and their “normal” scuba masks is also interesting! I normally like full-face dive masks, but I must say this Ocean Reef mask with the fully transparent faceplate isn’t so attractive in comparison to other masks like the Interspiro mask that Tania Raymonde is using in Deep Blue Sea 3.

Now back to the movie in general.

It has some flaws, no doubt. The scene above with Ida looking for that oxygen tank for example.

She is without air for around 130 seconds! She is not a professional diver like her little sister and isn’t a really good athlete or in great shape. I hardly doubt that she could hold her breath that long while being in such a stressful situation. Her sister is trapped, she is without air, searching for that oxygen tank in the darkness. She gets lost for a while and yet is pretty calm as she finally reaches Tuva again…

I would have shortened that scene. Let her dive without air for 60 seconds and then swim back on the brick of total panic. That would be more dramatic and more realistic in that case. Yes, there are apnoe divers that can go on much longer without air….but Ida isn’t one, she is highly stressed and not in a condition to stay without air that long.

Another thing is that tank she is searching for. I checked the scenes several times and can’t explain where it is coming from. It appeared out of nowhere! Where did Ida get that from?

Also, a big rock falls on Tuva. She is trapped under it but isn’t hurt at all!? I guess that is ….possible…but damn, a “little” hard to buy. But in the end, it has to be like that so that the story could develop like it does.

There are one or two other aspects but I don’t wanna sound too negative.

All in all it is a really good, thrilling movie! The desperate atmosphere is suspenseful and I tried to come up with solutions myself as Ida is trying to free her sister from down below! And as I said, more than 40 minutes of underwater scenes with women in one movie is pretty unique, especially without CGI sharks or other monsters.

Both actresses did a really good job and did most of the underwater scenes themselves after they both learned to scuba dive for the movie as I heard from an interview with the director (on the Blu-ray).

Ok, the drysuits aren’t exactly attractive, but well it’s Norway and not the Caribbean. Also, the darkness below at over 30 meters adds to the grim survival-fight-atmosphere. It wouldn’t work that well in a bright, beautiful setting like in the Bahamas for example.

Such movies must be supported, so other producers would make movies with scuba scenes too!

Scuba scenes are expensive, many producers are afraid of doing them.

This year there were two new movies with great scuba scenes…I hope that is a new trend!

The German Blu-ray has some extras:

I had hoped for a “Behind the scenes” feature as well…but no luck.

Oddly enough I am sure I saw such a video floating around the web some months ago. It was rather short but interesting and showed the filming in a water tank.

I will post more about this movie another time.

I have some story ideas of my own on this one. 😉

Have you seen it already?

What do you think of it?

Just got this Bluray in the mail today 😀

A little teaser of what my next post on Sunday will be about……. 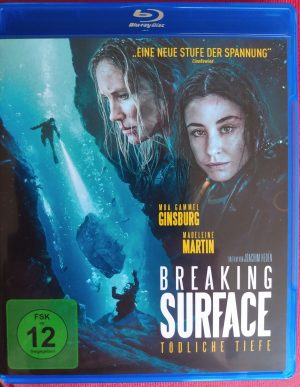 Will watch it this evening!

I waited for this one patiently since I saw the trailer for the first time in February.

In these videos, you will see something that you won’t see that often….a female astronaut that dives! And also a female safety diver as a bonus!

I watched this new movie with french audio and English subtitles.

They speak French, English, German and Russian in that movie. 4 languages in one movie…that was new to me.

I do understand English, German, and a little french, but unfortunately, the scenes where they speak Russian were only translated in hardcoded french subtitles like in the videos below.

Let’s start with the first underwater scene of the movie!

Well, her task is obviously to get her male buddy in that capsule in a short time, while he is (playing) unconscious.

Quite a good scene! In her spacesuit, she is very much restricted and can’t move around like a scuba diver. But she gets the job done just in time!

And this was just the first scene….there is another one with some….peril!

Quite a nice peril scene!

Eva Green is a great actress and looks great as an astronaut!

Actually, I’m not sure why she passed out. Was something wrong with the oxygen supply? Was it part of the training? Or was she just overworked and tired?

Of course with all the safety divers, she wasn’t in real danger here.

However an effective training for astronauts to simulate some situations that could happen in space.

This video gave me an idea for a perilous scenario for an underwater fight:

Imagine that there would be only one safety diver (female). That diver wants to drown the astronaut for some reason! They fight underwater!

The diver looks for a way to sabotage the oxygen supply or to cut her suit open….while the astronaut tries to fight back with some training gear.

Another scenario that needs to be filmed!!!

Exclusively on the blog, here is a bonus scene from the movie:

Quite a nice scene.

Always nice to see a woman using an oxygen mask (or gas mask)!

This is the movie (by the way…Eva Green presents her “twins” several times during the movie…):

In 4 days I will get the german Blu-ray of Breaking surface!

Looking forward to it BIG time! 🙂

This time a scuba couple gets trapped in a wreck as they are on a treasure hunt.

But rescue isn’t far away in form of 2 divers (one female). So we have 2 frogwomen in this one!

Yeah, a solid “trapped underwater with a 99% depleted tank” scenario 😉

I wonder why everyone is so reckless before they get trapped underwater? Both should have been out of the wreck long before they did.

They were very lucky that help was already on the way.

Wanna know from which episode this is?

….you can find a post that would fit in here as well!

Check out the post on my sister blog Maskripper:

Yesterday I received an amazon gift card frome someone, many thanks for that!

Problem is, there was no e-mailaddress given (just the prename), so I can’t send out an email with the password for the VIP club.

Would the nice guy who did send it yesterday give me his emailadress?

And please mention the amount of the gift card so I know that you are the one who actually send it.

If you haven’t got my mailadress so far, use the contact form.

In the first video, Jessica Alba dives around to find some treasure….but soon she gets trapped as her dive buddy is very reckless!

And…of course….her air is already 99% depleted as it happens! Surprise!

Nothing special, but a nice “out of air” scenario with Jessica Alba in her youth!

Picture quality could be better, but keep in mind that this show was never released in HD or even on a DVD.

Hopefully, that will change someday.

I got a bonus scene for you from another episode, to show that modern wetsuits can be sexy:

Yeah ok, the show is from the ’90s but that suit is the era of modern wetsuits already.

I really like that smooth skin wetsuit, even I would prefer it to actually have sleeves.

And the fact that she “strips” down to her bikini doesn’t hurt as well….

The VIP-Club 2.0 has been updated with new material, enjoy! 6 new scubalicious videos!

+ a video where two frogwomen go on a dive together…nut one of them has evil intentions 😉 – Scuba fight!
+ a video where a frogwoman gets trapped in a shipwreck