To the creative folks who actually are good at creating a banner:

My first idea was to use existing sexy frogwomen from movies and TV shows….but well, that wouldn’t really fit as Project F wants to create new videos and footage.

Something new, something original is needed!

So, if you are somewhat good at digital drawing, I’m talking to you 😉

The banner and logo should be showing a frogwoman (at least 1) and convey the feeling of danger and action.

The logo/banner should feature a sexy frogwoman in black rubber/smoothskin….posing.

Complete with tank and single or double hose regulator.

A knife would be nice as well to underline the action part.

Or maybe a frogwoman in distress (perhaps air hose sliced?).

Or two frogwomen battling each other.

What do you get in return? Besides eternal glory… 😉

Well, if I choose your art:

I will credit the art here on the page with a link to your DA site…if you have one (or something similar).

You can include lettering (with your DA name for example) in the art as long it doesn’t get too big.

You then get one month or more for the VIP club on this site…..or…..a video (or more) from Project F for free. You can choose.

Don’t know how many will participate, but if make something I really like, but I like the art of someone else even better…..you will get something as well.

And I also could make a blog post here with my favorite designs…depending on the results of this post.

The search is over! Will present the results tomorrow!

I added some pictures of scuba gear that will be used in Project F to the page.

I’m looking for a diver (M/F) with some experience in filming (and some additional talents) for Project F!

I will put the job offer on some sites in the next few hours.

Will be interesting to see how many folks are interested in participating in such a project.

The main scene features a very young Jessica Alba ( I guess only in the surface scenes) and her male buddy to dive down to a shipwreck.

They make an unexpected find….

Well, certainly not something you wanna find underwater….or anywhere else. #dead dude

I like the performance of the bad guy on the boat as they return to the surface.

Really evil and creepy. Seconds later he even shots Flipper puncturing his fin with a spear! But well, I decided to cut that out of the video as they may spark some comments….

Of course, he is ok later on as this is a kid’s TV show in the first place. 😉

The two kids get locked up and get rescued later on.

As a bonus, I have another short scene that doesn’t actually have a frogwoman in it, but you might find it interesting anyhow.

You may have noticed that the air hose of the dead diver was sliced….well, here is the scene from earlier in the episode:

Damn, how great would this scene be if it actually would have been 3 frogWOmen? Or at least one….

However, it shows how ruthless the main villain is as he just locks the guy in there after slicing his air hose.

Later on in the episode, the bad guy battles a good guy and loses (but isn’t killed), but that scene is rather badly done…in my opinion.

These scenes can be found in this episode:

I posted another update on Project F on this page:

On this page, I wanna collect all the updates on the project so you don’t have to search the blog for it.

Also, you can find the project now in the menu above as well.

I stumbled upon a very new documentary “Playing with sharks: The Valerie Taylor story” about the (very remarkable) life of Valerie Taylor.

That documentary is well worth a watch, I highly wanna recommend it!

But this post is actually (mostly) about another documentary….a documentary that is mentioned several times in “Playing with sharks”.

A documentary from 1971, with sharks…and Valerie Taylor in black rubber for most time underwater!

The film crew is on the hunt for a great white shark as they wanna film him underwater as he is feeding….something that was never done before (before 1971)!

There are a lot more scenes of her in that rubber suit, but then the video would get way too long 😉

Some years earlier she might also have used a double hose regulator, but those were already on the retreat since the mid-’60s.  🙁

But I really love her suit…for me, it can’t get much better than such a black rubber wetsuit!

That fish was just curious…luckily for her, that bite wasn’t strong enough to puncture her only air hose.

Of course, even that wouldn’t have been a problem for her as she is a very skilled diver and help would have been nearby.

But still, I really like that scene! I wonder what would have happened if she had had a corrugated air hose…. as these are way easier to damage/puncture.

The research on sharks was only at the beginning and it shows big time. This documentary was watched all around the world and I think it’s safe to say that it played an important role in the development of Spielberg’s blockbuster “Jaws”.

Taylor did actually film some shots for it some years later with her husband.

I still really love that movie, even I know it’s fantasy and that sharks don’t behave like that.

For the sharks that movie was surely catastrophic in many ways.

In the new documentary “Playing with sharks” that I mentioned earlier….Valerie Taylor reflects a lot on how her attitude towards sharks and sea life in general has changed over the years.

So, I can recommend to watch both documentaries as you then get the whole “picture”, even you should have a strong stomach for watching the old documentary as there is a lot of cruelty vs aninmals….especially whales….in it.

Here is a picture of the new documentary: 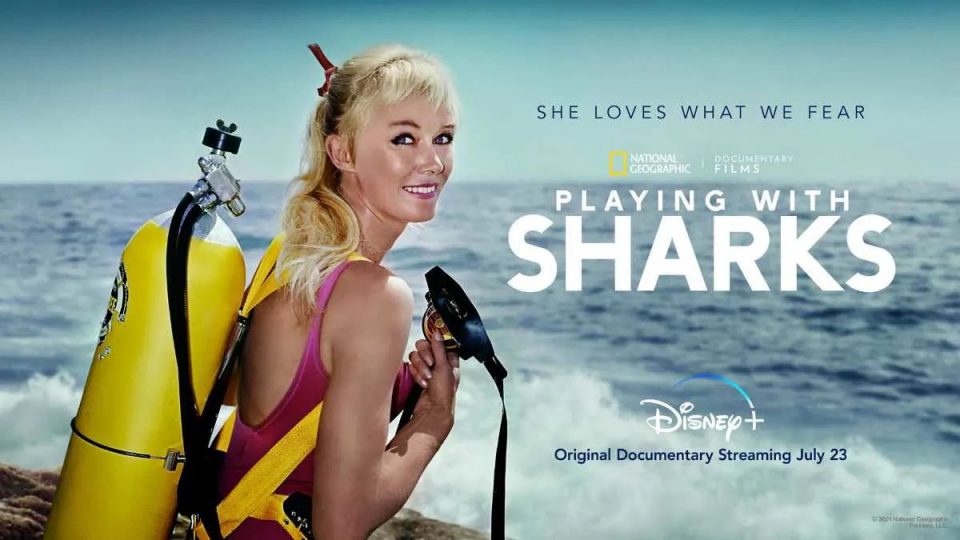 Also….a lot of interesting scuba gear from the ’50s onwards…in this one.

Wanna know the title of this documentary?

Let’s start with this teaser:

Watch the video FIRST before you continue reading!

I thought about not saying anything on this project in advance, but I decided that it might be better to let the cat out of the bag right now… 😉

You folks should know by now how much I love to see frogwomen in action scenes.

And despite all the scenes in movies and TV shows, there is still a BIG appetite for MORE as there are basically only 2 or 3 new movies with (at least) solid scuba scenes each year.

Most of the time I am rather disappointed by scuba fetish videos as they don’t provide what I wanna see (with exceptions) and have quite some flaws.

The idea to make scuba fetish videos myself is very old, but I was always afraid of starting such a project.

I said to myself that it would require too much money and would end up in disaster if I would try it.

Or I was wondering what people close to me (outside the scuba community) would think about me doing such videos.

Well, during the last months I started collecting scuba gear.

Scuba gear that I (and hopefully many of you) wanna see in such videos.

I invested some serious money already (for my scale) and the time for hesitating and looking for excuses is over!

In the coming weeks, I am looking for suitable frogwomen and some folks who will help me make such videos.

So, what kind of videos do I wanna make?

B) Sexy frogwomen in peril! (stuck underwater, out of air, sabotage etc.)

C) Sexy frogwomen in combat! (frogwomen fighting each other or against male divers)

I will also continue to gather gear, to have everything that is needed to start this endeavor.

Also, I will start looking for a guy/gal who has experience in underwater filming and can chip in some other qualities as well.

I don’t want to hire (expensive) models as frogwomen, I rather need women who can really dive and can perform underwater action scenes when needed.

Of course, they need to look good as well at the same time. 😉

I will make up a list of requirements and so on for that.

In the upcoming weeks, I will make some more posts about this special project!

Here is the trailer with another score….a verrrry famous one:

Do you have questions about this project?

Do you wanna help and participate in this project?

Do you have scuba gear laying around that could be interesting for this project?

Any help is very much appreciated!

Check out the contact form on the About+Contact site….

6 scubalicious videos are waiting for you!  😉

+ 2 videos with great highlight scenes from the movies and TV (“Vicious Frogwomen” + “Pull out the regulator) – These two are re-uploads I posted in 2019 or earlier.

Stay tuned for a little teaser trailer that I will upload in the next few days.

An exciting, scubalicious, and sexy future lays ahead 😉