That’s quite difficult to do …. but this vintage frogwoman did get trapped under a buoy 😉

Time for a new video outside “Project F”.

In this one, we go back to the 60s to a TV show with a friendly dolphin.

The first version of the video was a little over 6 minutes but it was blocked in most countries. I edited the video down to slightly under 4 minutes and that was then seemingly ok for Youtube.

Yeah, I don’t get how she managed to get trapped under that thing but ok. 😆

And normally she should be able to get out…or would have some serious injuries, but seemingly she doesn’t have a scratch.

But it’s a nice peril scene in vintage gear even I would have preferred her wearing a rubber wetsuit as that would have fit to the 60s perfectly.

I am not a fan of these bathing caps, but I know that some are.

All in all a solid scene.

The scene and the end is pretty funny…

Wanna know in which episode this happens?

My new Youtube channel is now at over 400 subscribers, don’t forget to SUBSCRIBE if you haven’t already.

With 500 subscribers the “community tab” will be activated for the channel.

I posted a little update on Project F:

(scroll down to update on September 26)

So, this one is a little….”cheat”, but I decided to post it anyway as this scene is very interesting!

Let’s start with some pictures (without showing the killer):

Yeah, I know, no female diver in this one….but there are some interesting aspects to this one.

Ok, first of all, I would like the scene even better if the killer would be a woman. But female scuba killers are an extremely rare breed….

The scene itself is done pretty well with close-ups of him and her. He holds her down by controlling her arms, that’s very efficient.

She tries to escape his grasp but fails, so she is doomed without help from the outside.

The scuba dude is a stone-cold killer the way he drowns her without any emotions.

I wish he would get drowned himself in the end….but that doesn’t happen….even he would have deserved it.

His blue outfit is quite odd, never seen a wetsuit like that, odd fabric. But it makes a lot of sense to fully disguise himself in complete blue so he wouldn’t be easily spotted in the pool.

But…..I think she should have seen him anyway….unless he was in a spot where he couldn’t see him from the position where she entered the pool.

However, since he is using a normal regulator she should be able to spot his bubbles! Well, unless he was able to not exhale from the time she came near the pool.

Guess that is possible.

The next question is…where he was as the agents searched the garden? If he would be already in the pool….they should have seen or heard him! Perhaps he sneaked into the pool after the search, guess that is also possible.

In my version, the killer would be a frogwoman in black rubber (screw the disguise 😉 who sneaked into the pool as her victim was already swimming there. The swimmer would fight back, struggle hard, steal the regulator of the diver, but would be drowned in the end after she nearly finished off the diver.

Or she would pretend to be dead and then attack the frogman from behind, stealing his regulator…. 😉

Wanna know from which TV episode this scene is?

Time for another good scene from season 10 of Baywatch!

Don’t know how that dude managed to get trapped like that…. perhaps he only wanted to be rescued 😉

In that case, his plan worked as one hot lifeguard was around to rescue him with her colleague.

Nice that the two women struggled shortly as the girlfriend didn’t want to surface.

Of course, I would have rather preferred to see her in a wetsuit, but it makes sense as there was no time to get into one.

The scene can be found in this episode:

Well, not an epic scene like two weeks ago, but another interesting female scuba scene from Baywatch.

CJ (Pamela Anderson) and her Baywatch buddies are investigating underwater to find a trace of some ocean polluters.

I added two more short scenes with her. One in her “working clothes” and one in a cool “civilian” outfit of hers.

Well, ok, the scuba scene….isn’t very interesting. It’s dark, no close-up, no real action. More interesting are the scenes on the boat, with the sexy scuba suits and the scenes after the dive.

Seeing Pamela in her working clothes is always….interesting….and seeing her and Yasmine Bleeth in civilian clothes for a change, isn’t too bad either 😉

And we learn a valuable lesson!

If you are an ocean polluter….you shouldn’t have your companies logo on the barrels!

Wanna know from which episode this was taken?

The Frogwoman VIP club 2.0 will be updated on September 2nd as I’m away for most of the weekend.

This one is for the fans of vintage scuba diving!

We have a woman and two men diving through crystal clear water, looking for someone… but there is a hidden danger in these waters 😉

Of course, if you know the rest of the movie, you have already seen the mysterious attacker that grabs her scuba mask.

But the real surprise/mystery is….why this woman isn’t shown AT ALL for the rest of the movie. Most likely the monster killed her somehow…

It’s a shame that the scene is interrupted that way…right at the moment where it got really interesting.

Her face without the scuba mask, with the regulator, looks really great: 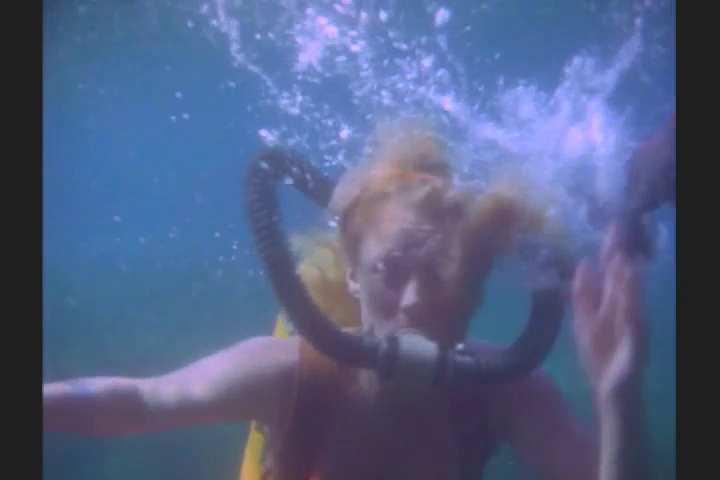 This is the rare movie:

This video I edited has three scuba scenes: First, we have a couple scuba diving and testing out some new equipment near a wreck. Then they are with their wetsuits on a boat. Only minutes later one man dives down to that wreck again, but he isn’t alone, someone is waiting for him….the female scuba killer! 😉

Scene 2 is already on this blog but in miserably quality.

Well, that last scene is really great! Her surprise attack on him, stabbing him, cutting his air hose….a really naughty woman 😉

She certainly makes sure that he won’t survive his dive.

But well, at least he had a really great time before his end…

Here is the IMDB link to that episode:

…well, at least in this classic movie with some nice vintage scuba gear.

In this clip I edited for you, we see a frogwoman underwater and on the surface. And she needs her regulator to breathe on the surface too!

Solid scene underwater and with a scuba scene on the surface as a bonus!

If you visited my other blog Maskripper the last days you saw one scene from this movie already. But the movie has another scene that fits well into this blog!

A frogwoman goes diving as suddenly….a underwater creature appears and starts chasing her… can she survive? Can she escape?

*EDIT* Moved to google drive, youtube had problems with it

And here is the title of the movie: