I have decided that I will upload videos from “Project F” with a runtime of under 4 minutes in the VIP section of this blog, alongside some bonus material here and there.

That will depend on how many short videos will be there in total.

So, if you are already a member there….well, then you can watch them with no additional costs!

The price for the VIP club will remain the same…but only for the rest of this year.

In 2022 the prices will go up a little (one month for 10 Euro instead of 8 Euro, and so on) as the content will grow bigger.

If you are already a member…that won’t affect you…. you will get what you have paid for in the past.

I want to provide transparency by telling you this now.

If you are thinking of joining the VIP club, I would recommend doing it now 😉

And if you are a member already, you could buy additional months for the VIP club now….just saying.

The ones that are longer than 4 minutes will be sold individually on a special page on the blog.

So, for starters, I wanna present a video where Frogwoman Alice is doing a little test dive in the pool with my favorite vintage FFM, the Technisub FFM (aka La Spirotechnique).

The mask gets oxygen from a Royal Mistral vintage double hose regulator.

She is wearing an Elios vintage style beavertail smooth skin wetsuit with matching hood and neoprene socks…also from Elios.

I have mentioned the difficulties we had to face during the shooting (lighting, camera settings, no fins possible, etc.).

So, the picture quality is ok but could be better for sure.

I will work on that for the 2nd shooting.

A short trailer that also includes scenes from this video:

This was a very much improvised video that I edited together from 2 videos.

The gear that Frogwoman Alice is wearing is near perfection for me!

The Technisub FFM is an old favorite of mine in combination with the double hose regulator.

And that Elios suit is really awesome, hard to find something better in my opinion.

*EDIT December 13* Not a big surprise, but diving with such a twin hose regulator and such a mask was new to Frogwoman Alice.

She thought it was fun even breathing from such an old vintage regulator was less comfortable in comparison with a newer one.

The dampened sound you hear pretty much at the beginning of the video is my old snorkel filling up with water and then me blowing it out.

I filmed most of the time just with a mask and snorkel to avoid having my breathing sounds from a regulator in the video.

But in that one scene, I went down a little too far…

Next time I will use a newer snorkel that closes up automatically in case it goes below the surface.

The video was available in the VIP club in December alongside other content….as it is under 4 minutes of running time!

And it is still available there during January!

Here is a quick overview of the content of January:

You can download these videos in the VIP club, but only for your personal use.

It’s pretty simple, I had to spend a lot of money, especially on scuba gear and location rent.

A lot of my …limited… savings were used up for that.

If I don’t make enough money with these videos…..I won’t be able to make new videos.

So…. I hope you appreciate these videos and want to see more in the future.

Some background info on the video editing:

I used the video editing software Shotcut for the first time here.

The original video footage was shot in 2.7K, I rendered it down to 1080p for better file size and a picture will fewer grain effects.

I used a white balance filter to get rid of the very warm light from the pool lights, which worked really well.

I used color grading to increase the brightness in the darker sections of the video by 10% (mainly her wetsuit).

And I used an audio filter to dampen down some weird audio creaks that occurred here and there.

I experimented with a grain reduction filter for another video but as much as it helped with that grain noise….it blurred the picture. So I decided against it.

I also experimented with a sharpness filter to increase the sharpness…but that grained the picture in return 😆 ….So I decided against that as well.

If you have some serious knowledge of video editing:

Any help is welcome as I am pretty much a newbie to this!

So far I just cut videos for the most part with extremely simple tools like Freemake video editor. And I played with the Windows Movie Maker.

I promised the participants that I won’t give away the raw footage, and I will keep that promise (actually stated in the contracts).

But perhaps some of you have some tricks in your sleeves 😉

I will work on my Shotcut skills and perhaps I will make another version of this video with different editing settings if it can be improved remarkably.

For todays post I got a pretty short clip with my favorite full face scuba mask!

But watch for yourself and hear her breathing sounds….

Great equipment! Would love to see that underwater in action!

This video is only a teaser, on the youtube site (not my youtube site) you can find more info on the full video.

Meanwhile on my other blog… 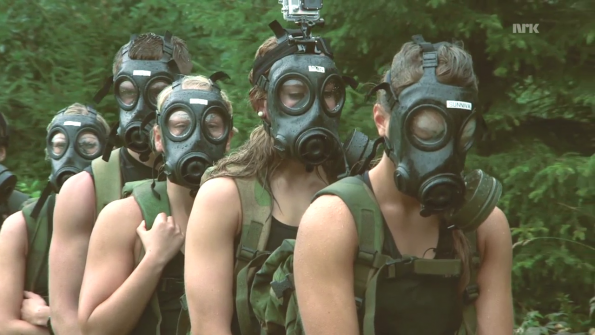