I know this movie since it came out in 2015 and got the UK DVD back then (for some reason it wasn’t released on Bluray?).

It was recommended to me at least 6 or 7 times since then but I didn’t make a post until today.

Why? Well, I was unsure about what to post about this movie. If I would post every scene that is somehow (scuba and/or wetsuit) interesting to this blog… I would have to post at least 70% of the movie…. as here the main actress is in a wetsuit for basically the whole movie(!) except for some flashbacks and…

Spoiler title
…the very first and last minutes of the movie.

So, I decided now to focus on the scuba part of the movie and cut out some minutes where the villain is just starring down at the ice for loooooooong.

What happened before the video scenes?

Well, basically the woman realized that her husband is a murderous psycho and he wants to kill her.

Well, quite a sinister and crazy dude!

And that is just the part where she has her scuba tank… there is a lot more to come.

First, let’s start with some things I don’t like about this scene:

The whole aspect of how much air is in her tank is quite weird. Right before the video starts he empties her full tank from 3000 PSI down to 1000 PSI in a matter of seconds by sucking on the regulator and pushing the “air shower” (the translated german term) button on it. That would never ever work that fast. Plus why does he use the “air shower” button and has the regulator in his mouth? That wouldn’t work for long as someone can’t take in that much air. And it would take much longer than in the movie.

In two takes the camera focuses on her depth instead of her gas gauge! 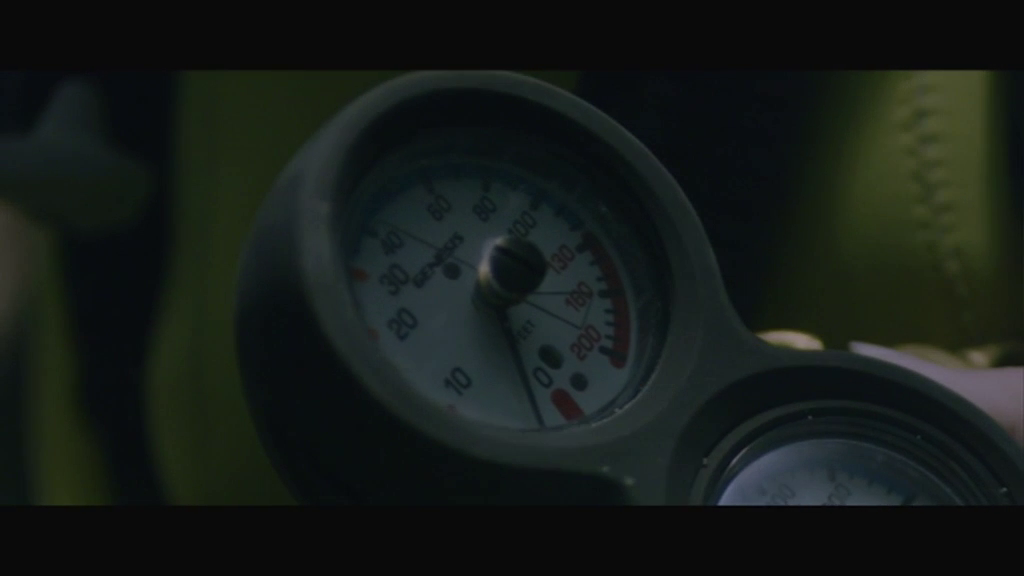 Well….why? I mean she is just under the ice the whole time and has only one way to go (up). The audience knows that, so why show it twice?

Perhaps, as the gauge is near zero… the movie makers confused it with the gas gauge?

And then the gas gauge very quickly goes from 1000 down to near zero in a matter of seconds! How is that possible? Or is that supposed to be a time-lapse?

However, there are a lot of positive aspects for me as well:

It’s quite a unique setting! I mean a guy who wants to drown a woman but puts a wetsuit and a scuba tank on her?

Certainly never seen that in any other movie….

The whole “running out of air” while the killer is just above her is very suspenseful!

The frogwoman is attractive and her wetsuit is quite nice. Of course, I would have preferred a black smooth skin wetsuit, but well, this way the heroine is very “flashy”.

And as the villain here is 100% evil and crazy… it’s a very intense survival scene…and that’s only the start for her.

About the whole movie:

There a very long takes of him just staring down at the ice. I mean the movie has only a length of about 70 minutes but it seems like they had to include a lot of overly long takes to even get to that length.

Plus his whole plan is kind of odd. I mean ok, he is crazy.

His whole plan for her is quite odd. I mean he certainly wants her to suffer before she dies.

He gives her a scuba tank but it is only one-third full.

So I guess he was “worried” that she might freeze to death before drowning? Even I can only guess how long someone could actually survive the ice-cold water, even with …an inappropriate… wetsuit on.

He gives her a wetsuit but that is only a little protection when the water temperature is around zero (celsius).

He straps the regulator to the back of the tank so she has to struggle a lot to even reach it.

Plus he is there on the ice but basically can’t see anything of her struggle, except some silhouettes and some air bubbles.

I guess he enjoys the whole situation big time, otherwise, he wouldn’t have come up with such a complicated scenario for her.

The flashbacks are interesting and important to the story, but too long for my taste and drag down the intensity a little.

I guess I will make a special cut of the whole movie where I cut out the flashbacks and overly long scenes of the villain doing nothing but starring for loooong takes.

But this movie is very much unique and very suspenseful, as I am cheering for her to find a way to get out of this horrible situation.

Yeah, this is a low-budget production and the acting isn’t always very good (especially the wooden villain) but certainly a very interesting scenario that you won’t find like this in any other movie.

Certainly, a movie that you should know and I can only recommend watching the whole thing!

Here are two posters of the movie (minus the title):

Very good motives in my opinion! Even the right one looks like bad CGI.

Here is the movie title:

What do you think of this scene and the whole movie?

2 thoughts on “The freezing frogwoman VS the certified maniac”