This was one of the earliest posts on this blog back in 2013:

And today it’s time to make a proper post with a FULL HD UPGRADE and proper text!

This one is an absolute classic …in my opinion…. and I will tell you why, but let’s start with some pictures first.

(had problems with these scenes on Youtube in the past)

So, you might guess why this one is a classic for me 😉

So, we have two beautiful women in nice vintage scuba gear! Ok, the BCD vests are kind of uncool…but at least they are only on the back.

The scuba fight is done pretty well, a nice struggle, she is occupied with controlling his knife hand as it’s the greatest threat to her.

They roll around nicely and finally, he manages to get his knife into position and slice her live-giving air hose!

It seems like they recorded the sound from her escaping air in a studio or so. Not 100% sure.

However, it sounds as sexy to me as it looks!

Lucky for her, he ….seemingly….. “just” wants to scare her off for the moment as he immediately swims away instead of holding her back at that depth.

Ok, hard to say in which depths they were… If they were deep enough he might have thought that she wouldn’t make it to the surface or wouldn’t survive an emergency ascend.

Also, the other Angel is there to rescue her by starting buddy breathing with her.

The sight of a sliced air hose spewing bubbles is quite something for me! 🙂 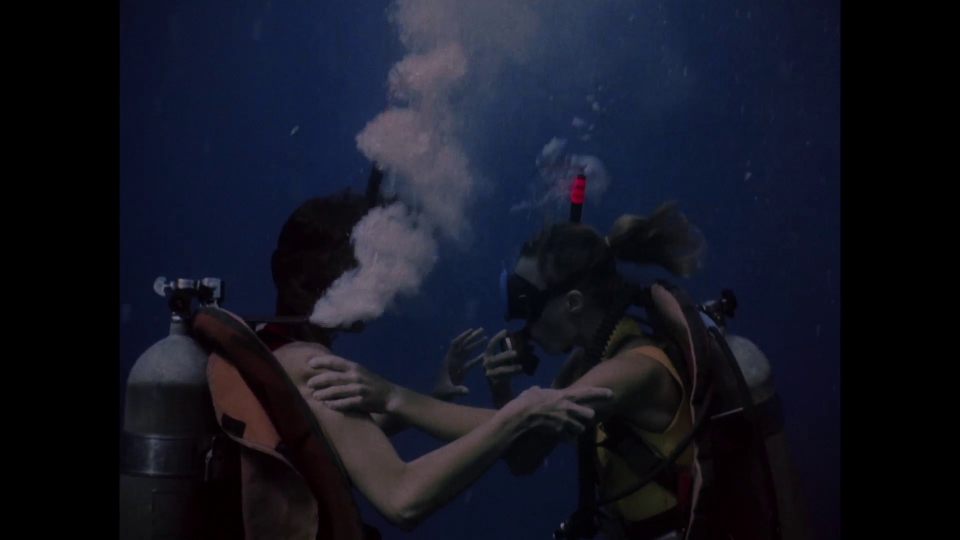 All in all, a very good scene that now finally gets into my Hall of Fame.

The end of the episode is also nice, as they look great with just their wetsuits on! Plus the nice Navy helicopter that reminds me of a certain movie with “some” scuba content 😉

But there is one more very interesting scuba scene in this episode!

This time three frogwomen are underwater and the bad guy is there again.

Time for a rematch!

A good scene, but it seems a little….”lackluster” in the end.

One of them is charging him like a bull, and that without a scuba knife! (Why do the Angels haven’t got any knives?)

But then the two others join and the action gets very, very tame. They move slowly and a little “random”.

That scene could have used a better directing/script. It seems like they don’t fully know what to do here and there…..

The other two should have had a little more energy.

In my version, the frogwoman in yellow would fight with him.

But ok, in this version they have to escape the blast radius and he is staying back to get blown up 😉

I will watch the full episode today to get the full backstory behind it.

This scene is special as 3 frogwomen are fighting against one frogman, even though it’s a short and tame struggle. Quite unique nonetheless…I would say.

Wanna know from which episode these scenes are?

IMDB says it’s episode 4 of that season, my info is episode 3….however the episode title of the IMDB link is 100% correct.