In the past, this was blocked immediately by Youtube (back in the early days of the blog) so I more or less forgot to make a post about it.

Here is a long cut of this scene in good video quality.

What I would give to have that scene in full colors…..

There are 4 seasons of this TV show. 3 of them were filmed in color. Sadly this is from the first season 🙁

However, I really love that scene despite some flaws!

Thankfully they had a female diver to play the role and didn’t use a male to play her action part as they often did in the 50s and 60s.

A really big minus point for me is how passive she is. But well, fits the time in which this was shot.

She basically does nothing. She doesn’t defend herself and she doesn’t attack him at any time! She did have quite some opportunities to attack him, but she is basically a Scubadoll in a rubber suit 😆

She just holds onto him while he is occupied with her tank harness, she could easily rip off his mask or rip out his regulator! Yes, she doesn’t have her scuba mask, but he is so close in front of her, that she should be able to see him well enough.

The fact that she doesn’t need her tank to breathe underwater is a minus point as well, but you can easily change that in your fantasy 😉

If I remember the backstory right she has the special ability to breathe underwater.

The bad guys are using her as a weapon to fight the submarine of the good guys. Her tank is actually an explosive device.

I love how the guy immediately goes for her mask to blind her (temporarily). He knows what he is doing.

It’s very rare to have an unmasked woman in such a scuba fight scene.

Her “unmasked” face looks quite sexy… 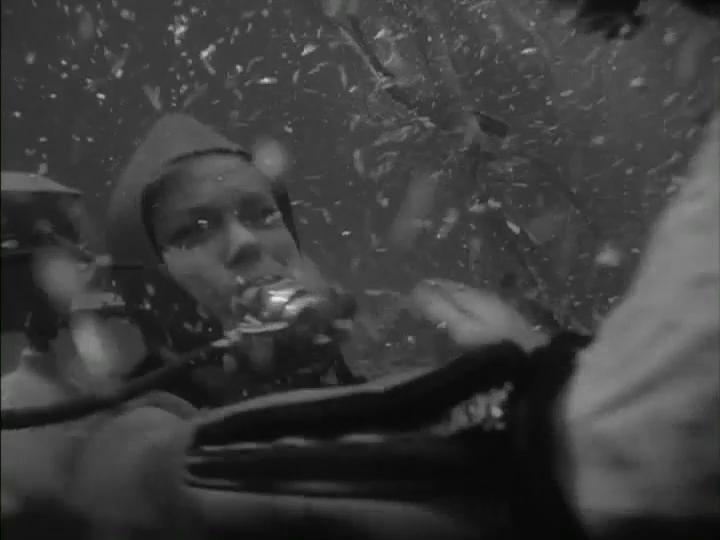 He has to get rid of her explosive “tank” and therefore he strips her of her scuba tank as well and thereby she also loses her regulator (that she needs in my fantasy).

The explosion hits her, and she is unconscious for the moment.

The naughty frogman takes ….advantage…. of that: 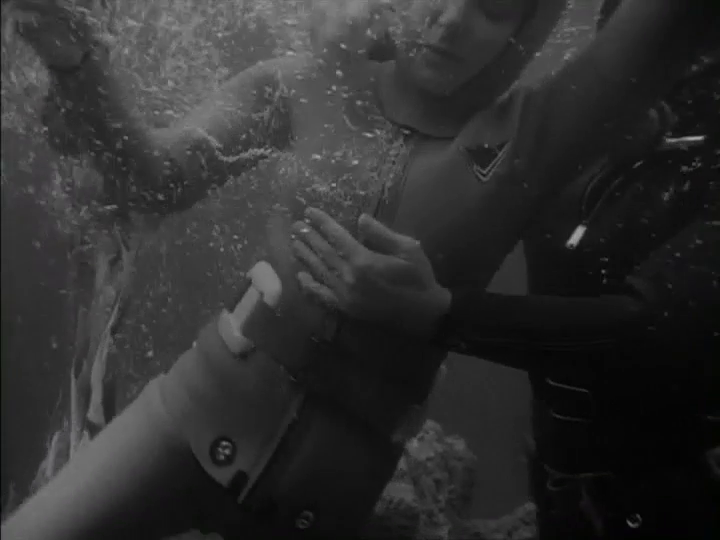 Damn, that stunt diver(?) really had a great time! I guess they had to repeat some of these scenes quite often 😆

I added the scene where she is unconscious and gets carried around in the submarine as that is quite sexy as well.

Again I played around with the simple tool to colorize one picture: 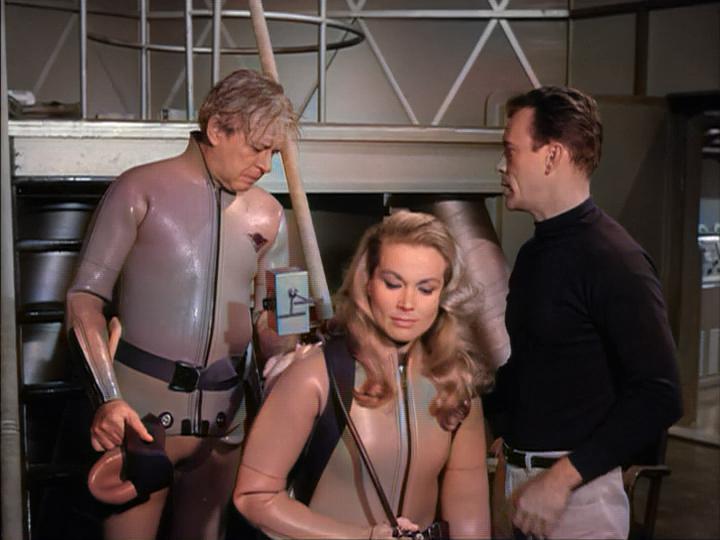 Yeah, not exactly a great result but at least better than the black and white version.

Pretty sure that is the Voit logo on his chest. Look like they used the same suits later on in Thunderball (different colors).

This episode actually aired earlier in the same year as Thunderball did (1965).

Wanna know from which episode this was?

4 thoughts on “A vintage frogwoman with a fake scuba tank gets attacked by a male diver! [Blog exclusive]”