Thanks to a nice guy on a forum I was pointed towards a youtube video in which I learned that there is a documentary TV special “The Incredible World of James Bond” from 1965 to promote the Bond movies and to keep the hype up about the franchise who was at an all-time high back then.

This is the IMDB page:

There seems to be quite a lot of Thunderball behind the scenes snippets in it, so I would LOVE to see the whole thing!

I tried any source to get my hands on this documentary, but no luck.

So, has anybody perhaps an idea where to get it?

It wasn’t ever released on any media as I think. Perhaps it was put as a special on a DVD or Blu-ray of a James Bond movie, but I haven’t found any proof of that.

So, if anyone has a nice link…. please use the contact form to get in touch with me!

If the video quality is ok, I would say I would like to offer 3 free months for the VIP club as a reward. 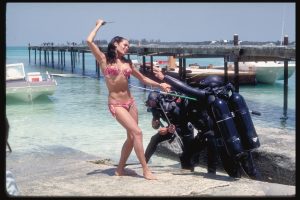 I already made a nice little “Thunderball bond girls on set” video out of the making of and the video mentioned above that I will post shortly.

But with the full documentary, I think I can make a better and longer video…..

Case closed as I got a hint by a nice guy about where to get that documentary!

Guess I will make a post about the Thunderball girls with some behind the scenes footage Sunday next week.

5 thoughts on “WANTED: “The Incredible World of James Bond” (documentary)”