(back to the Thunderball main page)

Angelo Derval must be a happy man, he is a well-respected military pilot and he is surrounded by the most beautiful women!

Now he is about to participate in a Nato training mission.

But finally, he runs out of luck…as he opens the door…:

Well, not the worst death and I guess he had a lot of fun with his “secretary” in that scene and in the past as well.

But now the SPECTRE agent takes over as an imposter:

All in all, it’s a great scene! We got to see the evil Fiona Volpe (Luciana Paluzzi) for the first time. And her cleavage in that dress….wow! She surely knows how to motivate Derval into trusting her 😉

And his surprise as he sees the imposter…great! And that evil guy gasses him without mercy. Some seconds later he receives his special breathing equipment that will keep him alive later (for a while) as he kills the crew of the Vulcan bomber and ditches the plan into the sea. And we see him blackmailing SPECTRE…not his best idea. How did he think he could get away with that?

But now for the weird/funny/strange aspects of this scene:

The gas he uses to kill the real Derval is supposed to be the same he later uses in the Vulcan bomber. Surely the real Derval gets the gas right in the face, he is doomed.

But are a tissue and some fabric from a dress are propper protection from that gas? Even if it is only a small dosage the imposter fires at him.

Of course, if he would have had a gas mask…the surprise (the gassing) for the audience would be gone. The real Derval wouldn’t have realised that an evil “twin” is standing next to him. I guess that’s the reason why they decided to do it this way….

As the imposter gets paid, two things are weird. Does he get all the money in advance? WHAT? Why would SPECTRE do that? He could decide to just run away (try…).

And I am pretty sure that, as he opens the envelope and pulls out the money…that you can see a one-dollar bill on top of the batch. 😀

Well, if you would pay someone 100.000$….hmh, it seems a “little” strange when you have a rather small batch of money and a one-dollar bill/note on top of it. 😉

Or am I wrong, do you see something else than a 1$ bill? 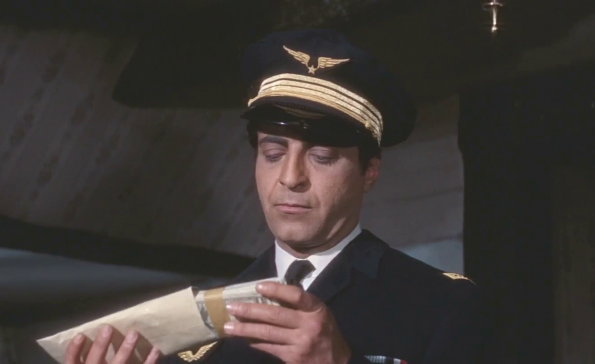 I am pretty sure that there is a “1” in the corner and Washington on the bill..

Your opinion on that scene? And on the 2 “strange” elements?

8 thoughts on “The real Derval gets gassed….and the imposter takes over! [+ Fiona Volpe and her stunning cleavage]”